Grand Canyon National Park is located in northwestern Arizona, the park encompasses 277 miles of the Colorado River and adjacent uplands. 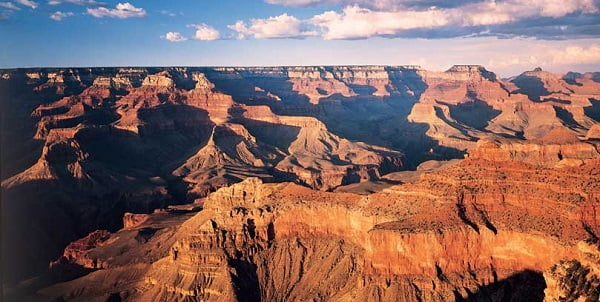 Getting There
The closest airport is Flagstaff, located about 80 miles southeast of the park. Other airports are Las Vegas, Phoenix and Grand Canyon Airport in Tusayan, just south of the park.

2. To the South Rim. Take Highway 89 South to just past Cameron, Arizona and take Stateroad 64 West to the Park.

1. To the South Rim. Take I-17 North to Flagstaff, Arizona and then take Highway 89 North to just before Cameron and take Stateroad 64 West to the Park.

1. Take I-40 West to Flagstaff, Arizona and follow the directions From the South to the South or North Rims.

3. Take I-10 West to I-17 North to Flagstaff, Arizona and then take Highway 89 North to just before Cameron and take Stateroad 64 West to the Park (South Rim). For North Rim directions, follow number 2 in From the South.

1. Head for Highway 89 South and follow the directions in getting there From the North.

Grand Canyon is unmatched throughout the world for the vistas it offers to visitors on the rim. It is not the deepest canyon in the world. Both the Barranca del Cobre in northern Mexico and Hell’s Canyon in Idaho are deeper. But Grand Canyon is known for its overwhelming size and its intricate and colorful landscape. Geologically it is significant because of the thick sequence of ancient rocks that are beautifully preserved and exposed in the walls of the canyon. These rock layers record much of the early geologic history of the North American continent. Grand Canyon is also one of the most spectacular examples of erosion in the world.

Hiking in Grand Canyon National Park can be a fun and rewarding experience as in other national parks. It is a great way to both see and experience the park.

In 2000 Grand Canyon National Park received 30,000 requests for backcountry permits. The park issued 13,000 permits, and close to 40,000 people camped overnight in the backcountry at Grand Canyon. The majority of these people are here for the first time, and although many are avid hikers, they find that hiking the Grand Canyon is very different from most other backpacking experiences. They tend to react to the experience in one of two ways: either they can’t wait to get back, or they swear they’ll never do it again.

Depending upon how prepared you are and what the canyon serves up at any particular time, your trip can be a vacation or a challenge, a revelation or an ordeal.

You will be hiking in a desert climate, where water and protection from the elements make the difference between life and death. Your trip begins at a high elevation (7,000 – 8,000 feet), and requires a bone jarring descent at the beginning of your trip, when your pack is heaviest. You’ll face the long climb out when you are already tired.

Grand Canyon National Park encompasses more than 1.2 million acres, the vast majority of which are inaccessible due to the predominance of cliffs and inhospitable to all but plants and animals able to survive in the desert. The Colorado River bisects the canyon; hikers can cross the river only at Phantom Ranch. If you choose to hike from rim to river to rim, you will have to deal with an elevation differential of more than 10,000 feet from start to finish.

Most visitors begin and end their hikes from the South Rim.

Grand Canyon is heavily visited for most of the year and it is imperative to plan ahead for lodging, backcountry permits, or mule trips. Persons planning day visits only should arrive early in the day as parking is limited. Write the park in advance to request a Trip Planner (or Backcountry Trip Planner if you are planning to backpack).

Grand Canyon National Park is in a remote part of the country. Here are a few tips.

Bicycles are not available for rent at the park. If you plan to bring one, remember that in Arizona bicycles are subject to the same traffic rules as automobiles. Use extreme caution when riding on park roads; shoulders are narrow and vehicle traffic is heavy. The West Rim Drive is open to bicycles throughout the year, but remember that during the summer months there is heavy bus traffic on the West Rim Drive. Use caution and do not obstruct traffic. Bicycles are not allowed on any park trails.

Mountain bikes are allowed only on those roads open to automobile traffic.

Persons wishing to take a guided bus tour may make arrangements to do so through Grand Canyon National Park Lodges.

Groceries and supplies are available on the South Rim at Babbitt’s General Store (both in Grand Canyon Village and at Desert View). There is a small camper store on the North Rim, adjacent to the North Rim Campground.

Weather is particularly changeable in spring and fall; visitors should be prepared for a variety of climates.

See the Weather Page for current conditions, forecasts and other weather data.